Skip to content
Posted on January 16, 2017 by Paige Sherrard 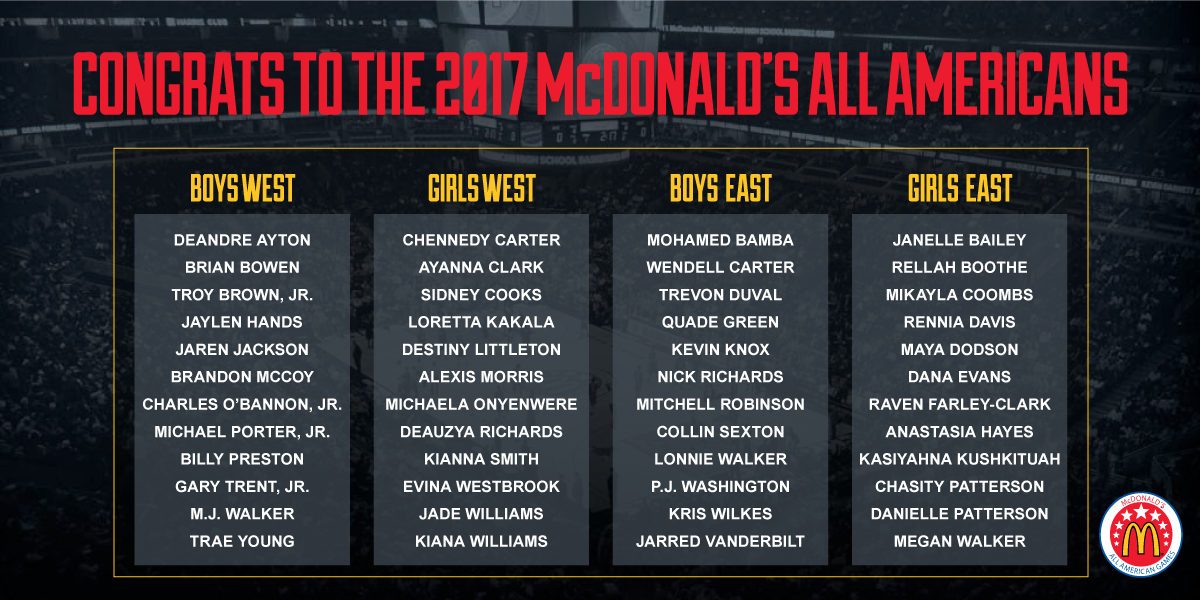 Late last night, ESPNU announced both the girls and boys selections for the McDonald’s All-American game.

The duo are the 10th and 11th signees in school history to earn the prestigious distinction. All of which have been recruited by Coach Jeff Walz.

Earlier this week, Evans’ was also named to the Naismith High School Girl’s Player of the Year Midseason Team.

The McDonald’s All-American Game is on Wednesday, March 29th at the United Center in Chicago, Illinois.

What a honor!!! Thank you @McDAAG 🏀. I'm so excited and can't wait to play with the best of the best!

The CSZ crew had a great time at the first annual @cardinalsfootballcamp special thanks to @montytbe1 and @bdomann19 for having us
@jpineda247 happy birthday from all of the staff here at CSZ
Scott satterfield and staff is sending a statement
Sign up and support @montytbe1 and @bdomann19 football@camp coming up June 25th!!!
Congratulations to the newest NATIONAL champion in the ville @gabiileonn_ 🏆🏆🏆
Good luck to the @louisvillebsb team
According to @bypatforde Louisville has chosen its full time AD congratulations @joshheird
Huge pickup for satt and company wow the ville goes 5/5 on cali 👀
@louisvillefb lands a HUGE commitment from @jermaynelole he will be a immediate impact player for this team
Check out the new episode featuring @coachboobrewer 👀👀👀
Congratulations to @reiddetmers on his first no hitter in only his 11th career start
@jeremy_csz joins @dpence9 to discuss where to expect @malikc_3 in next seasons draft and much more
Happy derby day go check out @jeff.nunn_csz derby preview heard he even won some money yesterday 👀cardinalsportszone.com
Cardnation it’s @dj_wag21 birthday so you know what to do comment and show him so love from his future city PC: @ncaa.grfx
Just saying @emoni21 and @walking._.bucket if y’all want to get to the league @louisvillembb has the staff for you 👀😏