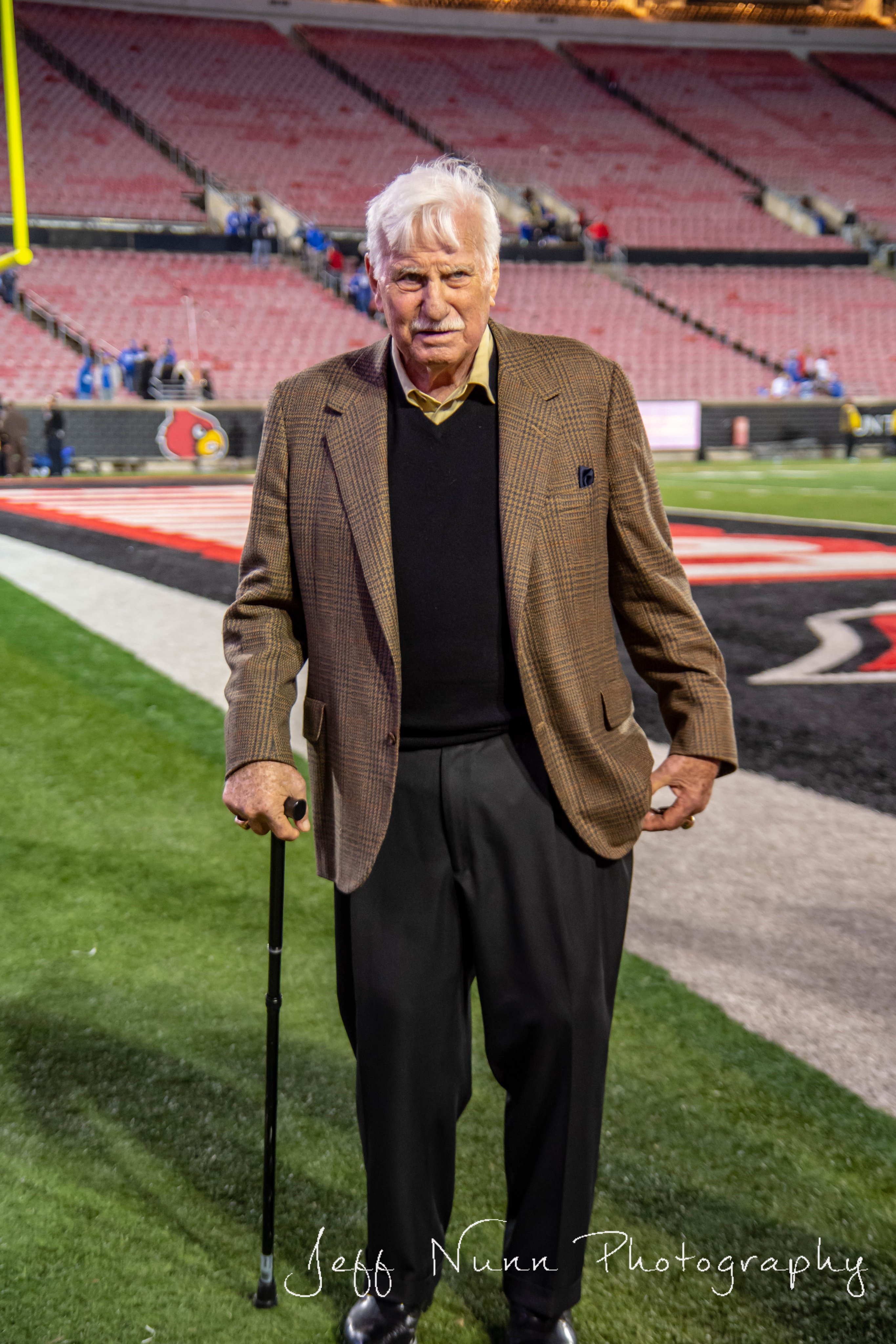 On Saturday Morning, Louisville and the football world learned that legendary Coach Howard Schnellenberger passed away at age 87. He coached the Cardinals from 1985-1994 with a record of 54-56-2. Coach Schnellenberger also led the Cardinals to their first New Year’s Day Bowl against Alabama in 1991 Fiesta Bowl winning 34-7. He will be surely missed by all the football community and will always be a Cardinal in our hearts. Prayers out to his family and his former players.

Our thoughts are with the family of Howard Schnellenberger.

The impact he had as a coach at Louisville & on the game of football is immeasurable. pic.twitter.com/cutdU7nwKa

Coach meant so much to me. He recruited me to Louisville and called to convince me to stay and give a new coach a chance. I trapped to him a few months ago and glad I got to. I will never forget you coach. Rest in peace. https://t.co/BWliwJezr5

I’m very proud to have had the opportunity to spend time with Coach Schnellenberger! A true legend of our game!! I am very thankful for his legacy! ❤️🙏🏼 https://t.co/vIbSsv907R pic.twitter.com/zQlZGcsAoS

Rest In Peace to college football legend Howard Schnellenberger. So fortunate to meet him a couple years back!

⁦@GoCards⁩ lost a legend and a valuable piece of our legacy. Coach Howard Schnellenberger fostered hope and success in our football program. It’s an honor to have known him and have his support. RIP Coach Pipe and our best to Beverlee and their extended family. pic.twitter.com/IPXLTSDybE

So sad to hear of the passing of Coach Schnellenberger. With his pipe in hand, he inspired us to dream bigger & was the driving force for our beautiful stadium that we enjoy today. Rest In Peace Coach 🙏 pic.twitter.com/7x46WLCraA

Thank you #HowardSchnellenberger you taught me a valuable lesson about mental toughness, what it takes to be successful & play like CARDS: Competitive Arrogance & a Relentless Determination to Succeed. 🙏🏿 #L1C4 pic.twitter.com/Oe8Vl5cKAc

Without him, there is no Miami Football.

Howard Schnellenberger leaves behind a legacy more impactful than he’ll ever know.

Our thoughts are with his family and friends. pic.twitter.com/7lwHhUGSnx

Our thoughts and prayers are with the family and friends of Howard Schnellenberger. pic.twitter.com/cvDEl1q6C3

LOUISVILLE, Ky. – Former University of Louisville head football coach Howard Schnellenberger passed away on Saturday morning at the age of 87.

Schnellenberger spent 10 seasons as head coach of the Cardinals from 1985-94, posting an overall record of 54-56-2. Despite his record, his contributions to the program were immeasurable. He inherited a program that had endured six consecutive losing seasons before leading the Cardinals back into the Top 25. He also was influential in helping the program build a 42,000 seat football stadium that has been expanded twice since its inception in 1998. The 60,800-seat facility is the only all chairback stadium in the country.

After going 8–24–1 in his first three years, Schnellenberger was able to turn the program around and go 24–9–1 over the next three seasons. During his 10-year career, he led the Cardinals to a pair of bowl wins. The Cardinals posted a 34–7 win over nationally ranked Alabama in the 1991 Fiesta Bowl, capping a 10–1–1 season and the school’s first appearance in a final poll (11th). The Fiesta Bowl appearance was the school’s first in a New Year’s Day game. UofL also posted a win over Michigan State in the 1993 Liberty Bowl.

“Coach Schnellenberger fostered hope and success in our football program. His legacy lives on as we continue chasing the “variable of time” per his memorable quote. Our best to Beverlee and their extended family.”

Louisville Head Football Coach Scott Satterfield
“I’m very saddened to hear the news of Coach Schnellenberge’s passing today. He was one of the giants in college football and his impact on the sport in the state of Kentucky is immeasurable. The building that we walk through every day was created by the values that he built. Coach Schnellenberger set the standard of leadership for this position and his impact on the game will always be felt at the University of Louisville.”

Some shots by @jeffnunn_photography at @louisvillefb media day @montytbe1 @ke1trel Kenderick Duncan @coachlt39 @hudson_71_60 @__marshon__
In case anyone missed the @louisvillembb socials the other day and didn’t see @jjtraynor_ is a freak 👀
The first @big_ticketsc camp was a slam dunk we are honored to be a sponsor of his phenomenal camp
Recruitments for some of the top 2023 kids are heating up and maybe even the first commitment from the class Of 2024? #adammoore #ducerobinson #stanquanclark #issacbrown
Flyville shirts are straight 🔥 @pierceclarkson showing them off on his IG live how many commitment’s doe you think captain clarkson secures for the cards this weekend?
Congratulations @daltonwrushing on being drafted 40th in this years draft he’s the 95th player since Dan McDonnell took over to be selected PC: @502_sportscenter
Few shots from the @__marshon__ and @joshminkinsjr camp this morning awesome time see @malikc_3 @devanteparker11 and @mvp_j.j @montytbe1 @its_yaya4 @dtell.99 coming out to show love around 130 kids came out for the camp!!!
One of the biggest commitments figuratively and literally in the class made it official today @maddensanker71 edit courtesy of @502_sportscenter
Starting today every Monday leading up to the season opener we will be dropping position breakdowns visit cardinalsportszone.com each week @treid.70 @dondeezy74 @rb_56_ @michael.gonzalez6 @coachcardwell_ @hudson_71_60
Happy retirement to the best to ever do it @kkcards1 🐐🐐🐐 edit credit to @louisvillembb
We all love 🥞🥞🥞another BIG commit for the @louisvillefb team edit credit to @502_sportscenter give them a follow as well
Also just announced is we will be sponsoring the @joshminkinsjr and @__marshon__ football camp food drinks drills and entertainment will be happening July 16th at Ballard high school jeremy_ csz @tshirthooliganshop
Happy to announce we will be sponsoring @big_ticketsc upcoming camp July 30th at high view baptist church!!! @jeremy_csz @tshirthooliganshop
The CSZ crew had a great time at the first annual @cardinalsfootballcamp special thanks to @montytbe1 and @bdomann19 for having us
@jpineda247 happy birthday from all of the staff here at CSZ